Posted at 00:34h in Artist Profiles by GVG
3 Likes
Share

“My new paintings feature imagined landscapes and figures existing in a mythic world,” says Oliver Polzin. A painter who grew up romping around the pine forests of Michigan, spent his adolescence in Sedona, Arizona, and the last decade in Santa Fe, Polzin has been pretty integrated with nature his entire life.

Polzin received his BFA in painting from Arizona State University in 2009, and his interest in mythology, psychology, storytelling, and nature has been expressed since in his immersive design, installation, and animation work for the experiential arts company Meow Wolf. Though he collaborates with hundreds of artists on massive installations, it’s through painting—often alone, outside—that Polzin articulates a unique vision. “Through years of plein-air painting and wilderness exploration, I have amassed a library of lived experiences in nature from which I render my work. In recent years, it’s developed beyond the genre of realism, and has become a vehicle for conveying the lore I encounter in the wild,” he says.

In It Used to be the Other Way Around, Polzin reflects on our relationship with nature and how we’re still “seeing the agricultural relationship play out.” A stone-like figure sits alone, meditatively, in a field of wheat, overlooking an expanse of layered landscape and ineffable sky. To the left, in the distance, is a small building.

“In this late stage of extractive civilization, I think it’s a misnomer to think of nature as an edifice,” says Polzin, who says that the modern urge to “protect” the natural world “looms large in the human psyche.” He finds it interesting that we feel control over this world, as if it wasn’t always grander and more complex than ourselves. “Really we’re embedded in something so wildly beyond our comprehension,” he says.

These new paintings are gouache on panel, a medium that has particular allure for Polzin, who made his first gouache at age 6. Lately, he’s been learning to push it in new ways. “It’s the most versatile paint I’ve ever used,” he comments.

It Used to be the Other Way Around SOLD 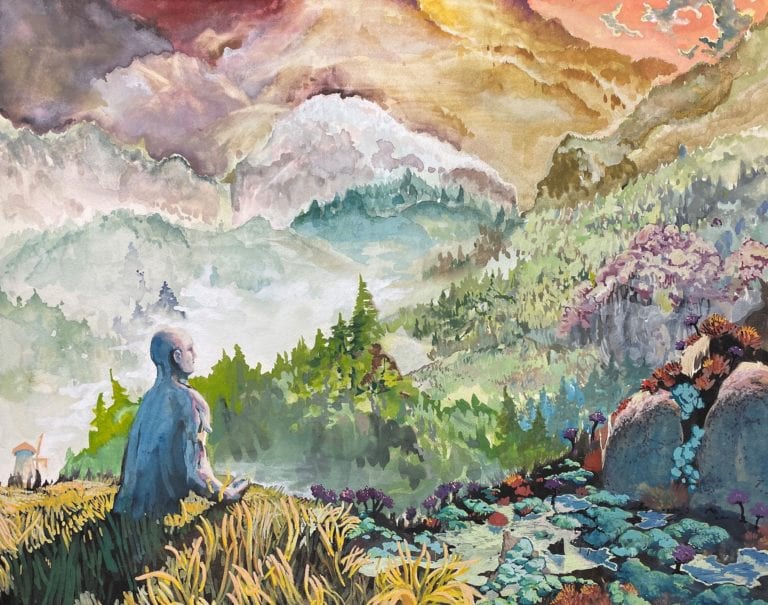 It Used to be the Other Way Around utilizes a watercolor style along with opaque layering one might expect from oil or acrylic, allowing an aesthetic permeability between boundaries, such as self, other, and nature. Interestingly, figures often appear alone in Polzin’s landscapes, suggesting a marked individualism perhaps necessary in a person’s quest to connect with the land’s mythos—and yet they are perceiving, blending into, and becoming part of these landscapes, questioning the very notion of separate selves. 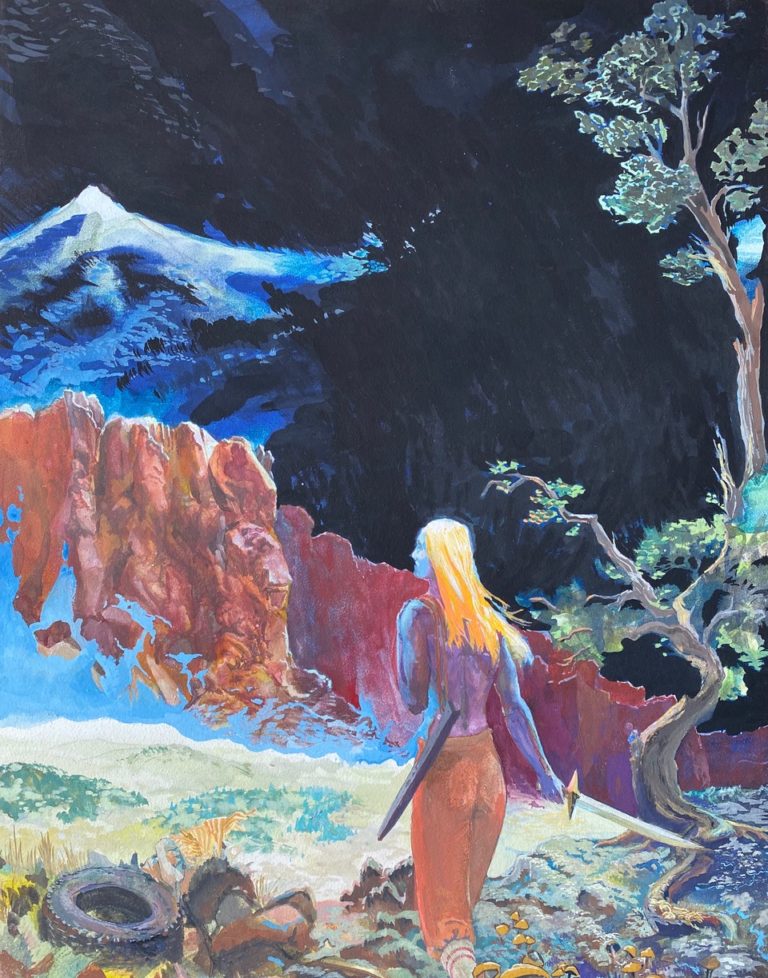 In Mytho-Poetic Reality, an armed woman passes through a junkyard with a discarded tire, skull, and blooming mushrooms. “In this painting there’s almost a Tarot card vibe—some archetype being expressed,” says Polzin. “There’s a woman with flaming hair next to a juniper, walking through a junkyard, approaching a red mesa with snowy peaks. What does that say to you?”

There’s something ominous in this scene, but the figure is clearly empowered. As for the archetype, that invites interpretation, but Polzin does say: “There’s some kind of altered state this character is in where everything has significance. Everything become a symbol and is synchronistic.”

The piece also plays with the dynamics of perception, both for the figures in the painting, and for us, the viewers. Polzin places us behind subjects, looking at them looking. We cannot see what they see, but we do see them in context—in a way they themselves cannot. “The viewer has a certain level of insight or omnipotence,” says Polzin. “It begs the question: how much can we see about this person? Can you ever really know a person? Or even yourself?”

As for process, Polzin does preliminary sketches, but as he starts painting, there’s a kind of alchemy and spontaneity that requires letting go. “As a painter you can only know the incantations for how to put something together,” he reflects. “At a certain point, you just hope you’ve summoned it. Then suddenly it’s there.”

A Self Portrait directly addresses this inquiry with “a perspective on self as told through landscape elements.” Here three selves appear: a diminutive, gray figure on a cliffside looks out at a scene where a blue figure emerges powerfully from mountains and clouds shift into a visage, actualized. “Part of the consideration here is where the lines around the self even are,” says the artist. “We have experiences that allow us to witness wildly different possibilities of ourselves. It strikes me that there are pervasive unknowns in all aspects of our lives.”

A Self Portrait SOLD 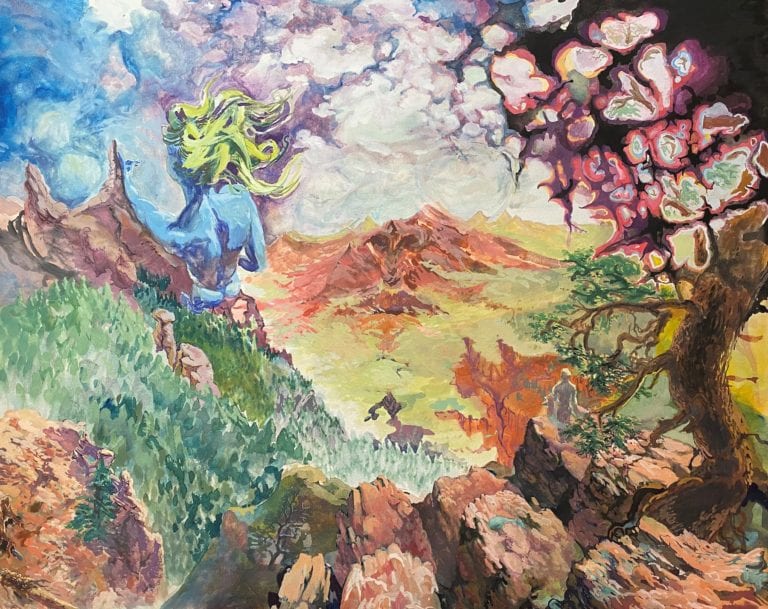 Here the landscape is shaped by ages of erosion, weathering, and change. One can imagine a volcano once erupted, or that a glacier may someday inch through. “There’s an inkling of process here, which I think is similar to how we can look at ourselves.” The blue, green-haired figure is, to Polzin, ” the most mysterious.” Occupying the highest point in the composition, there’s a connotation that some of the most profound aspects of ourselves are just that: ever mysterious, reaching beyond us. Meanwhile, there’s a centrifugal reckoning in this image, as if perception itself is curving off into a psychedelic, otherworldly unveiling.

Polzin’s use of gouache is markedly at work here, where each character dissolves into the scene in different ways. Generally he works with larger brushes in preliminary layers, finishing his paintings with a very thin brush, which allows for those characteristic pops of pale, turquoise lichen or other organic matter. 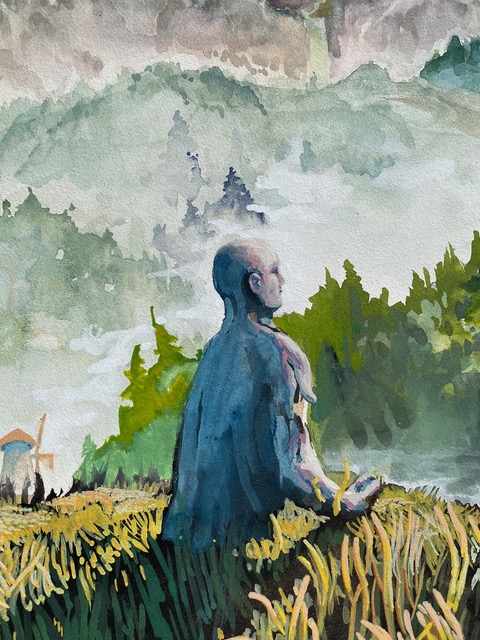 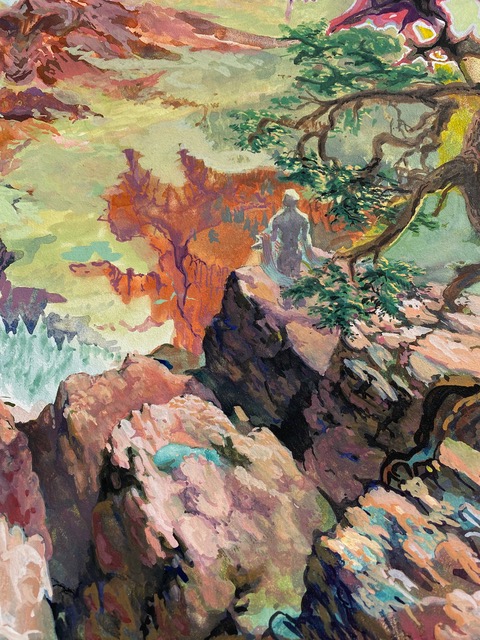 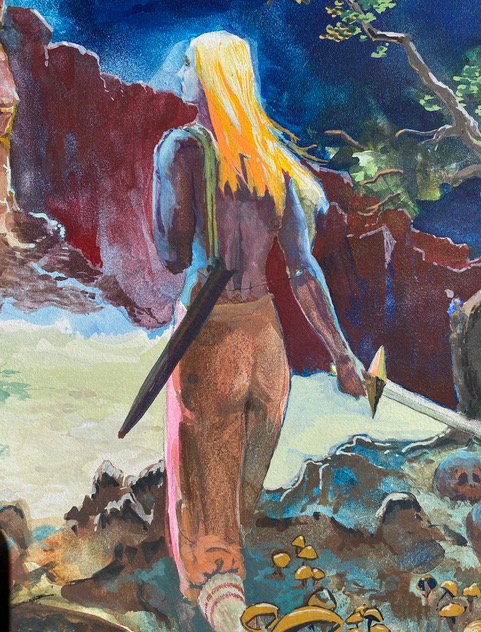 Lately we’ve all had the opportunity to reflect and, perhaps, reprioritize. As recent events have made clear, we live within an always changing environment, and we are connected and dependent on each other for health, safety, and progress.

In the midst of this, Polzin’s work asks the question: What might we learn of ourselves from the mythos of nature?