“We’ve been collaborating for decades,” says Ernst Gruler, with a laugh. “This show is the elaboration of our collaboration.” co.elaboration features new work by Blair Vaughn-Gruler, whose process-based approach with intricate loops, lines, marks, and layers of pale-toned oil paint make for large-scale, meditative paintings. Gruler, an artist and designer, has a new line of furniture including Tree Lights as well as Tank Lamps, which, built from repurposed scrapyard steel parts along with fine Japanese paper, make for a strong counterpart to Vaughn-Gruler’s meditations.

With co.elaboration, the couple celebrates a decade running GVG Contemporary together, a gallery complete with two sculpture gardens on Delgado Street next to Canyon Road. The show fills the walls with Vaughn-Gruler’s new paintings and feature Gruler’s furniture as well as his popular sound sculptures, bells made from repurposed steel parts and glass. This is a rare glimpse at the creative work that drives GVG Contemporary, where, the rest of the time, visitors can also see work by a group of contemporary painters and multimedia artists whom the couple has represented over the years. 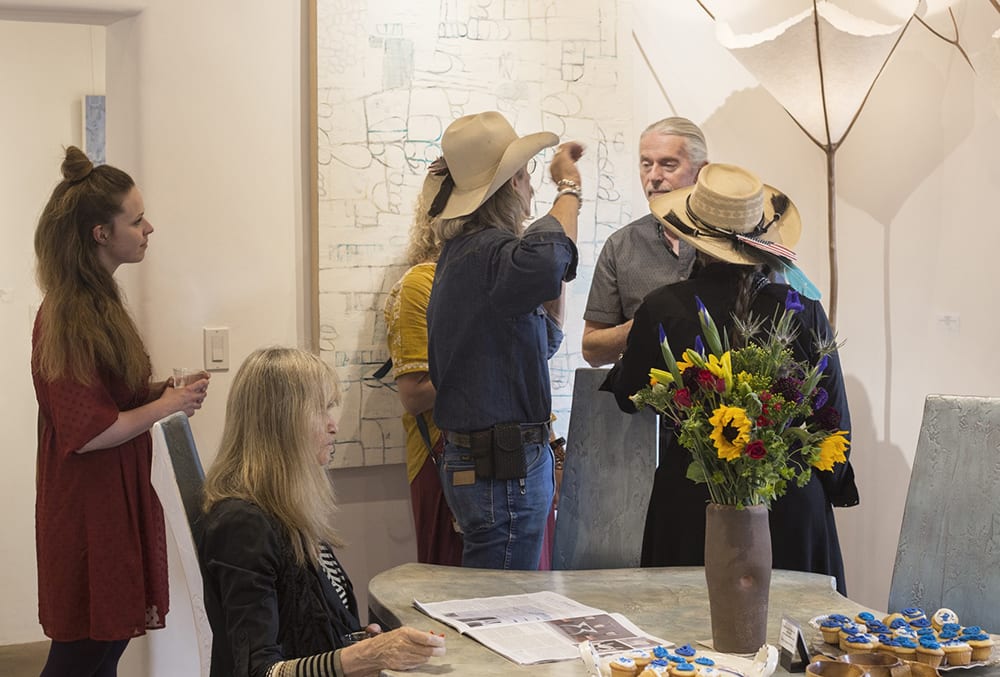 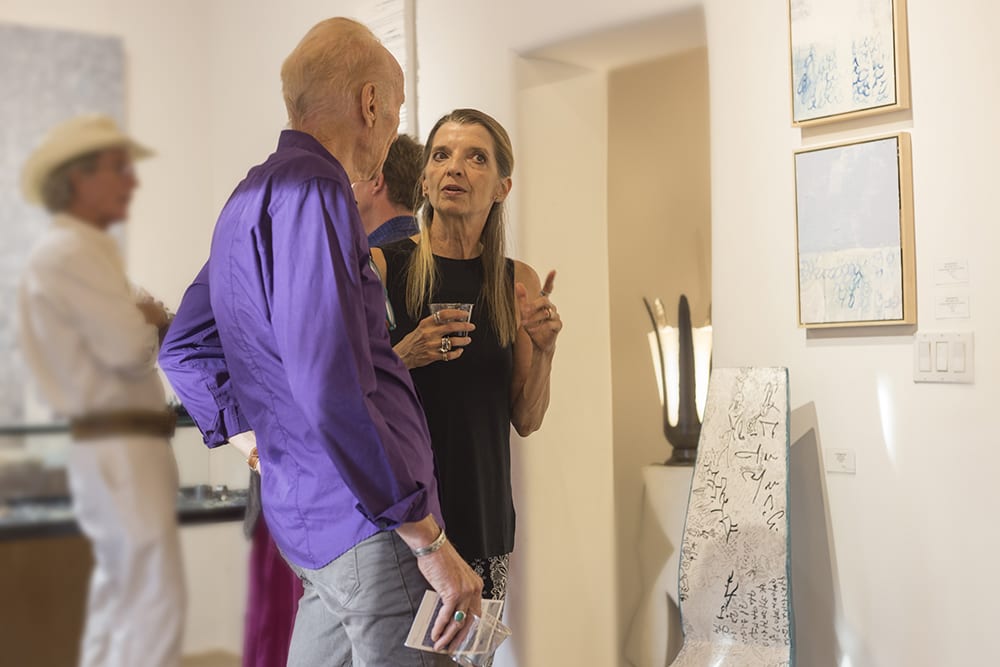 For Gruler and Vaughn-Gruler, celebrating their decade together in the business of art is significant. The couple met in Michigan nearly 30 years ago when Gruler, a lifelong musician, was strumming his guitar at a gallery where he was a board member and curator. It was a moment for Cupid, and both parties left their former relationships to start a new life together. Gruler had a background in high-end furniture and model making and was working on his MA in Furniture Design at Northern Michigan University at the time. Vaughn-Gruler encouraged him to start showing his work at galleries. Their life in art together began.

For a day job, the couple opened a boutique, selling clothing, jewelry, beads, and imported artifacts. The business was so successful, they were able to sell it and move to Sedona, Arizona along with Vaughn-Gruler’s younger son, also a painter and an animation artist (her elder, an artist who works with art and technology, had gone off to college by then). Once in Sedona, they found a homeland in the Southwest, but the wandering itch got them again. Gruler, after all, had spent a couple of his formative years hitching on the road, gaining life experience that likely made him the thoughtful, open-minded stepfather and artist he became. Now his adventures came with a family, not in tow, but holding the reins.

Vaughn-Gruler had long been interested in Santa Fe and the city’s art scene, having spent several years in New Mexico back in the 1970s. The couple again sold shop, but this time, they decided to start a new kind of business: a gallery where they’d show their work and represent artists of similar aesthetics. GVG Contemporary was born with a combination of their names: Gruler and Vaughn-Gruler.

A decade in business has also seen deeply individual development in the couple’s very different art practices. When they’re not at the gallery, they share a home together in Lamy, New Mexico, where Vaughn-Gruler has a tidy painting studio and Gruler has taken over the better part of a six-car garage (he also has a metal shop where he welds in Santa Fe). In the meantime, Vaughn-Gruler, who got a BFA in Painting at Northern Michigan University in 1979, completed her MFA in Visual Art at Vermont College of Fine Art in 2010. “Going to grad school in my 50s helped me re-contextualize my painting practice for the 21st century. It also helped Ernst and me think about what we wanted to do with our gallery so that it would have a specific voice to contribute to the Santa Fe gallery scene.”

Meanwhile, Gruler has picked up both welding and acrylic painting, and his sculptural furniture has gone through stages of refinement. His work is ergonomic and sturdy (Gruler uses wood laminate, also known as plywood, and a typical chair, for instance, is made of over 40 pieces). Gruler has become more fluid in his use of different mediums and says his work has, in a sense, become “less linear.” A table, for example, is shaped and curved so that all seated are close to each other, and there’s no head of the table. Some table designs are composed of two to three sections that fit together in different ways, or can be separated for other purposes. He’s also started making a series of Tree Lights with stone bases that he finds out on hikes along with saplings from still-standing trees. co-elaboration also includes his new line of Tank Lamps, which are created from salvaged steel tanks cut opened and turned out, like petals. Of his diverse and ever-evolving multi-genre work, Gruler says, “I just make stuff.”

About their 10th anniversary, Vaughn-Gruler comments, “It has been a pleasure and a thrill to be embraced by Santa Fe visitors and art collectors. We are so grateful to our gallery artists, staff, patrons, and the vibrant arts community for 10 years of support.”